skip to main | skip to sidebar


Posted by Gabriel Ratchet at 2:17 PM No comments:

Lance Mannion takes James Wolcott's comparison of Mitt Romney's "47%" remarks to Alec Baldwin's scene in Glengarry Glen Ross and runs with it.
Posted by Gabriel Ratchet at 12:54 AM No comments:

Email ThisBlogThis!Share to TwitterShare to FacebookShare to Pinterest
Labels: the decline of western civilization, wingnuts

A Note on Prometheus

Please note:  this post contains spoilers, so don't say you haven't been warned. 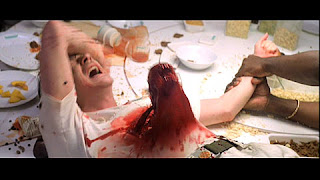 Ridley Scott's original Alien is of course a classic, in no small part because of the scene illustrated above, which is remarkable for the way it takes the classic female fear of the terror and pain of childbirth and reverses it by inflicting it on a male character.  Given the near-universal reverence in which childbearing is held, the scene even now has a subversive edge that resonates to this day.

All of which makes Scott's kinda-sorta-prequel, Prometheus, a bit of a disappointment.  Well, it's a disappointment on a number of counts, but I'm limiting myself to one in this case and that's this:  One of the main plot points is that the Noomi Rapace character, Elizabeth Shaw, is impregnated with an alien parasite that left to its own devices will almost certainly kill her if it is allowed to fully develop.  She demands that it be taken out of her, but David, the robot played by Michael Fassbender, refuses because being a stooge of the corporation that funded the mission, he presumably figures that the critter inside her may have some sort of potential as a bioweapon.

Okay, I can buy this so far, but the film now has Shaw undergo an extremely painful Caesarian to get the alien critter out of her.  Not an abortion, which would have been traumatic enough, even if her "child" were not a grotesque alien parasite, but a Caesarian, which means that she spends much of the rest of the film doing typical Action Girl stuff while presumably held together by nothing more than a row of staples, which doesn't help the believability of a film whose credibility is straining at the seams already.  But hey, at least she didn't have an abortion, right?  Because that would totally be worse than unleashing a hoard of alien parasites that would kill every living thing on earth.

And the sad thing is, is that ridiculous as that last sentence is, there are conservatives in this country that would totally believe it and liberals who would go along with it just to avoid offending anyone.

Posted by Gabriel Ratchet at 8:53 AM No comments:

Email ThisBlogThis!Share to TwitterShare to FacebookShare to Pinterest
Labels: Film, Horror, Pop Cultural Oddities, Things I Do to Waste My Time

Rat Scabies and the Holy Grail: Can a Punk Rock Legend Find What Monty Python Couldn't? by Christopher Dawes
My rating: 4 of 5 stars

In which Christopher Dawes, a mild-mannered music journalist, somewhat improbably discovers that he's been living across the street from one of his boyhood idols, Rat Scabies (real name: Chris Millar), the former drummer for the seminal English punk band, The Damned.  Even more improbably (this is nonfiction, believe it or not), it turns out that Scabies' father, an antiquarian bookseller by trade, is something of an amateur expert on Rennes-le-Chateau, being both a crony of Henry (Holy Blood, Holy Grail) Lincoln and a past president of the UK branch of the Sauniere Society, an enthusiasm he's managed to pass on to his son. Consequently, Scabies decides, more or less on a whim, to rope Dawes into helping him look for the Holy Grail.  His method, to the extent he can be said to have one, consists primarily of careering around southern France half-drunk and freaking out the locals, which, when one thinks about it, is probably not that far removed from the approach previously used by King Arthur.

This book is not only hilariously entertaining but it proves once and for all that The DaVinci Code isn't entirely useless, as Dawes and Scabies discover at one point when they run out of rolling papers.


View all my reviews

Posted by Gabriel Ratchet at 2:10 PM No comments:

Email ThisBlogThis!Share to TwitterShare to FacebookShare to Pinterest
Labels: History as She is Wrote, Myths 'n' Legends, Pop Cultural Oddities

The Smoke by Tony Broadbent
My rating: 3 of 5 stars

Surname-less cat burglar Jethro gets in over his head by swiping the wrong person's stuff in the course of a "creep" at an unspecified Eastern European embassy and soon finds himself at odds with both Eastern Bloc and British intelligence, a rival cat burglar, and various factions of postwar London's criminal underworld. While the plot is hardly original and the ending is weak the book really shines in its depiction of its setting: a London only just adjusting to a peacetime scarcely less austere and depressing than the war that preceded it. And Jethro, through whose eyes we see it, is an able guide to "the Smoke": a charismatic Cockney antihero whom I could easily see being played onscreen by Michael Caine in his younger days. This novel is its author's first and it appears that he has at least two sequels planned, so I imagine any weaknesses of this book may be ironed out in the future.


View all my reviews

Posted by Gabriel Ratchet at 2:06 PM No comments:

Your Weekend Dose of 70s Nostalgia

You're welcome.
Posted by Gabriel Ratchet at 1:02 PM No comments:

Email ThisBlogThis!Share to TwitterShare to FacebookShare to Pinterest
Labels: If Music be you know whatever, Pop Cultural Oddities

Well, that explains everything then ...


How Ayn Rand and L. Ron Hubbard Came Up With Their Big Ideas -- powered by Cracked.com
Posted by Gabriel Ratchet at 5:34 PM No comments:

Email ThisBlogThis!Share to TwitterShare to FacebookShare to Pinterest
Labels: grifters gotta grift, the decline of western civilization, The Literary Life 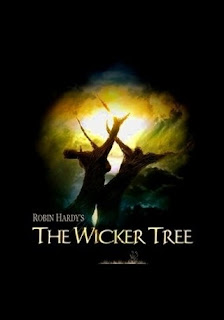 Robin Hardy's belated followup to his 1973 cult classic, The Wicker Man, isn't quite a sequel and isn't quite a remake either.  It's more a variation on a theme, using the basic framework of the earlier film to tell what starts out as a sort of fish-out-of-water comedy rather than a mystery.  It's as though he'd decided to crossbreed his original film with Local Hero, sending a pair of born-again missionaries from Texas off to convert the "heathens" of Scotland, where they end up in one of those deceptively idyllic Hammer Films-style villages where Things Are Not As They Seem (in another sly nod to its possible antecedents, Hardy plays a version of "I Know Where I'm Going", the folk song used in Michael Powell & Emeric Pressburger's film of the same name -- and the gold standard for Scottish-set culture clash comedies -- over the opening and closing credits).

Exactly what the point of the whole thing is, though, beyond, perhaps, a desire on Hardy's part to recapture his now-four decades past glory, is a bit harder to say:  those familiar with the original film are unlikely to be as shocked by the ending as the film needs them to be, whilst those who aren't may very well check out long before they have the chance, due to its somewhat meandering and uneven pace, which, lacking the built-in suspense of its predecessor's police procedural format, mostly just marks time until the big finish.

Still, the picture is not without its charms:  it has an agreeably off-kilter tone, and fans of the original may have fun spotting the parallels to it.  And while it doesn't contain, say, any scenes of Nicolas Cage in a bear suit punching women in the face or the like, it's still better than Neil LaBute's godawful Wicker Man remake, so there's that ....

Posted by Gabriel Ratchet at 12:14 AM No comments:

Posted by Gabriel Ratchet at 3:38 PM No comments:

Gabriel Ratchet
If you believe in telekinesis, raise my hand.

Culture: High, Low, and Various Points In Between